In 1945, when the Western Australian Department of Native Affairs first became aware that plans were underway among Pilbara Aboriginal people for a strike, Aboriginal Affairs in the state Labor government was included among the responsibilities of the Minister for the North West, Aubrey Augustus Michael (Bob) Coverley. The head of the Department at this time was Francis Illingworth Bray, who had succeeded A. O. Neville as Commissioner for Native Affairs in 1940, but the priorities of the Department tended to be determined by the overtly pro-pastoralist Coverley, whose contention that getting Aboriginal people to work was the best that could be done for them conveniently coincided with the needs of squatters and pearlers in his electorate. The Department was small and poorly funded, with only two field officers for an enormous state with a large Aboriginal population. To a considerable extent, field administration was undertaken by police officers who were appointed as Protectors of Natives, with responsibility to the Department.

The Department’s field officer for the vast northern region of the state was Travelling Inspector Laurence (Laurie) O’Neill, whose experience as a police officer in the Kimberley qualified him for a role that was largely concerned with ensuring that Aboriginal people continued to be a compliant source of labour for the pastoral industry.

Deputy Commissioner for Native Affairs at the time of the strike was Charles Lewis (Lew) McBeath, who had worked as the supervisor of Aboriginal institutions in the Kimberley and as O’Neill’s predecessor as Travelling Inspector for the state’s northern region. As Bray was frequently unwell, McBeath was often required to take over. When Bray took sick leave shortly after the strike began, McBeath assumed the role of Acting Commissioner, and O’Neill was promoted to Acting Deputy Commissioner. To replace O’Neill as Travelling Inspector for the northern region, a policeman with Kimberley experience, Thomas Emmes (Tom) Jensen, was seconded to the Department of Native Affairs from the police force.

In April 1947 Ross McDonald became Minister for Native Affairs in a new Liberal state government. Hoping to shift the Department’s approach from one of segregation and control to a focus on Aboriginal welfare and inclusion, McDonald commissioned magistrate F. E. A. Bateman to conduct an inquiry into Aboriginal affairs in the state. While the inquiry was being undertaken McBeath continued in the role as Commissioner in an acting capacity, and O’Neill retained the position of Acting Deputy Commission. In an attempt to gain departmental influence over the strikers, McDonald appointed a special officer, John Wriede Bulmer (Jack) Gribble, to live at the Twelve Mile Strike camp and win the strikers confidence. The plan was short-lived as it soon proved to be a failure.

Following the tabling of Bateman’s report, McDonald appointed Stanley Guise Middleton from the federal government’s Papuan administration as Commissioner. The Department was expanded, with many of the new officers recruited from New Guinea in an attempt to disentangle the role of Native Administration officers from that of the police. Laurie O’Neill was returned to the Pilbara as the Department’s local representative in December 1948, but by mid-1949 Middleton had become convinced that O’Neill’s policeman’s approach was exacerbating the Department’s difficulties in dealing effectively with the strikers. O’Neill was relocated to his home town of Kalgoorlie where, in mid 1951, now in a subordinate position in the Department, he took his own life. He was replaced as Patrol Officer in the Pilbara by Noel Hawke.

From mid-1949, the Department hoped that the less confrontational approach of the new Deputy Commissioner, Sydney Elliott-Smith, now in charge the state’s northern region, would convince strikers that continued involvement in the movement was against their best interests. By mid-1951, however, with large numbers of marrngu leaving stations to join the mining cooperative, the Department withdrew its opposition. Elliott-Smith was replaced as Deputy Commissioner by F. W. G. (George) Anderson, who was impressed by the cooperative’s achievements. Patrol Officer Harvey Tilbrook, who replaced Hawke in 1951, developed a positive and supportive relationship with the cooperative during 1952 and 1953.

In 1954 the Department changed its name from ‘Native Affairs’ to ‘Native Welfare’.

By this time, the Department had become increasingly concerned about McLeod’s management of cooperative finances. When the cooperative’s company, Northern Development and Mining, collapsed in 1954, the Department refused to assist the group, beyond providing food for the children, so long as McLeod remained involved in any way. In 1955, on the understanding that McLeod had left the group, the Department established the Pilbara Native Society to enable the cooperative to continue operating. McLeod’s subsequent return to the Pilbara and the formation of Pindan Pty Ltd led the Department to again oppose the movement. Donald Stuart, once a strong supporter of the movement, was appointed as a special departmental officer to undermine McLeod’s influence. Pindan members refused to deal in any way with the Department and had a particularly acrimonious relationship with Patrol Officer Adrian Day. When opposition to the movement failed, the Department adopted a policy of non-intervention. In 1959, however, when Pindan began to split into factions, another special officer, William (Bill) Courtney, was appointed to develop greater trust in the Department among Pindan members. 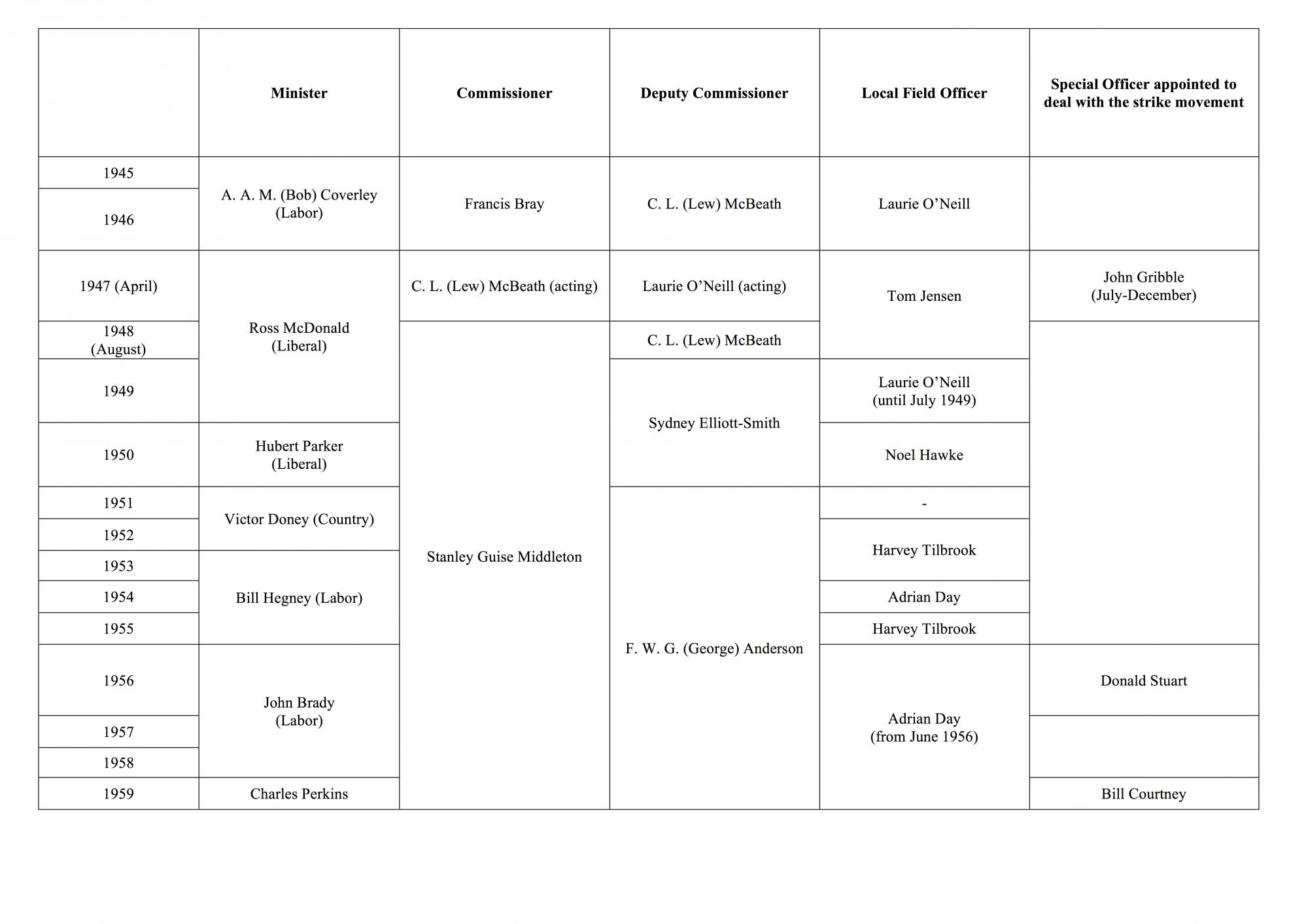