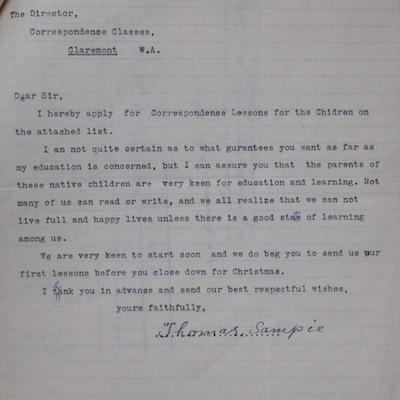 Tommy Sampie grew up on a Catholic Mission at Lombadina, on the Dampier Peninsula north of Broome, where he was taught by Irish and Scottish nuns of the Order of St. John of God. He was later sent to a nearby mission at Beagle Bay to learn carpentry. Before moving south to the Pilbara, Sampie worked on a dairy in Broome, as a shell-opener on a pearling lugger and as a seaman on the lighthouse tender. He later worked at various station jobs in the Port Hedland area, and was working as a cook on Munda station when the strike began. One of the few strikers who was literate, he began teaching the children at the Twelve Mile soon after strikers established a camp there in August 1946, conducting classes under a tree until a shelter was constructed from flattened petrol drums for use as a school. Dorothy Hewett described him as ‘stocky, earnest, with a great sense of responsibility and love towards “his kids”’. He hoped that government assistance for his school would enable the children of the strikers to become nurses and accountants, but the Department of Native Affairs considered him dangerously radical and opposed his efforts. The Western Australian Department of Education supplied correspondence lessons for use in his school, but no other assistance was provided.

One of the leaders at the Twelve Mile, Sampie frequently acted as spokesman for the Twelve Mile community in discussions with police and government officers. He also played an important role in corresponding with the Committee for Defence of Native Rights, keeping them informed of developments in the Pilbara. Information he provided often formed the basis of reports in the Western Australian Communist newspaper, The Workers’ Star. He spoke and wrote strongly for the rights of Aboriginal people. ‘We only want our rights & freedom with liberty in our own country’, he wrote to the Department of Native Affairs in 1949.

There may have been some tension between Sampie and other strike leaders, particularly over the role that Aboriginal Law would play in the new community. In 1948 he resisted efforts by other strikers to shift the school to Moolyella, and continued teaching at the Twelve Mile until 1950, when he left the movement. He returned to employment as a cook on Mundabullangana Station near Port Hedland.

Note on spelling: Tommy Sampie’s name was often spelt ‘Sampey’ or ‘Sampi’. However, he spelt his name ‘Sampie’, and his niece, Sheila Sampie, confirms that this is the correct spelling.