Andrews gained information on the movement from a network of interested people.

re. the McLeod enterprise (North-West):

It so happens that since I wrote to you last week stating that I had little prospect of obtaining facts about this matter, I have met someone who was able to give up-to-date information. This is as follows:

1. Mr. McLeod is undoubtedly a man of vision, although both appearance and manner go against him. He has many friends, but is generally ‘persona non grata’ with the whites — and (natrually [sic] enough) particularly with the squatters) — throughout the North-West. He is frowned upon politically, having had the temerity to nominate against Labour. This may account in some part, though not wholly, for the evident bias against him in the Department of Native Affairs.

2. The settlement financed itself — quite handsomely — until a few months ago, chiefly by the sale of a rare metal, columbite. However, some samples sent overseas were reported upon as not up to standard, sales fell off, and the enterprise (which was wholly in McLeod’s name, though he shared the proceeds honestly) had failed, Mr. McLeod being bankrupt. Whether or not there was any foul-play about the columbite is uncertain; it is generally thought that there was not.

3. The account of the Settlement given by my informant (who had visited the Settlement and stayed there during its successful period) reminded me strongly of the South American primitive-communist experiment — Lane’s (?) — of the last century. No one was compelled to work, and all took what they needed from the common store. At times there were as many as 700 natives (nearly all full-bloods from stations where their lack was badly felt). Sanitation is surprisingly good. Everyone pulled his or her weight. The natives gained immensely in self-esteem, and this has gone back with them now throughout the North-West. Mr. McLeod has thus made history, and has done an immense service to the old Australians not only in the North West but throughout Australia.

4. Partly at least through the impress [sic, impression] made on the Education Department’s officers in the North West by the McLeod settlement, which had in it many skilled artisans, lorry-drivers and the like, schools for ALL children — black, white and coloured — are shortly to be opened on many stations; and too a technical school for the North-West is virtually certain. OIL may have something to do with this)

Summing up — I would estimate Mr McLeod as a GREAT AUSTRALIAN whose name will certainly go down in history.

(Again here, a letter of praise may do much good just at this juncture)

My only further comment is to express a wish that the State Department of Native Affairs would serve the old Australians with the same success and good will which is evinced both here and in the North-West by the Education Dept. Certainly it works under a long outmoded Law, betterment of which was some months ago blocked by the gerontocrats — and plutocrats — of the state Legislative Council; but this excuse notwithstanding, it should do much better. It spends more and more on pen-pushers, whilst virtually shelving such matters as housing. 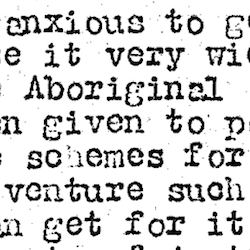 Hoping to see the success of the Pilbara cooperative repeated in other parts of the country, the Council for Aboriginal Rights sought to spread information about the movement as widely as possible. This letter from Andrews to Alfred Nailer Jacobs, an Aboriginal rights activist in Western Australia’s south-west, explains the Council’s interest in and plans for supporting the movement. 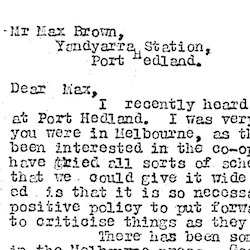 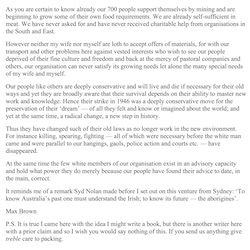 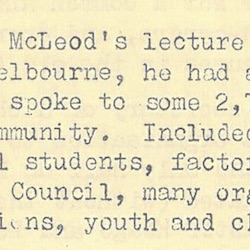 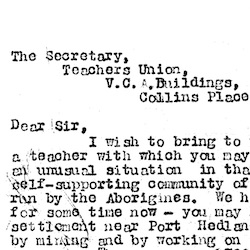