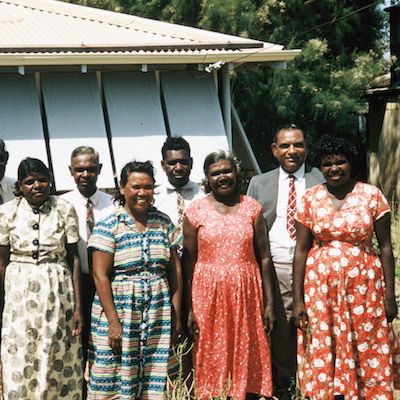 Pindan Pty Ltd was formed in 1955 to replace the failed Northern Development and Mining company. Don McLeod was chairman of the board of directors, and the other directors were Ernie Mitchell, Peter Coppin and Elsie Lee, a non-Aboriginal supporter who acted as the group’s purchasing agent in Perth. McLeod and Lee each held one share, while Mitchell, Coppin and four other marrngu (Coombie, Orange Muthering, Jacob Oberdoo and Jacob Windjaga) each held 1,000 shares in trust for the rest of the group. At first the company engaged primarily in grass-seed and pearl shell collection on the Pilbara coast, but in 1958 it turned its focus to mining manganese at Nimingarra in a joint enterprise with Albert Sims and co through a syndicate company called Simdan.

During the Pindan years of the second half of the 1950s, the group was defiantly independent, refusing to cooperate with the Department of Native Welfare and deliberately challenging discriminatory state legislation.

By mid-1959 there was discontent among Pindan members over company priorities. The economic prosperity of the early years of the decade remained elusive, and much of the group’s earnings were used to purchase equipment for company enterprises. Among other causes of discontent, members demanded that more of their earnings be returned to them, through the provision of better clothing, for example, and education for their children, a primary objective of the movement that had still not been achieved. Tensions came to a head when McLeod threatened to resign if the company retained T. J. Hughes as its lawyer. A majority of members voted to retain Hughes anyway, and McLeod accordingly resigned. Over the following months a significant portion of Pindan members joined McLeod to form a new company, called Nomads Pty Ltd., which acquired Strelley Station in 1973. Pindan continued under Ernie Mitchell’s leadership and later, as Mugarinya Aboriginal Corporation, acquired Yandeyarra Station.