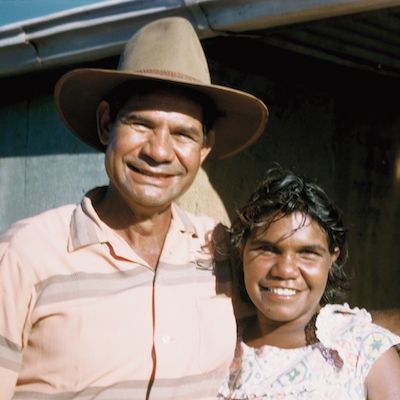 Peter Coppin was born in about 1920 on Yarrie station to a Nyamal woman, Nurparn (Sally) and a pastoralist, Christopher Coppin junior (known as Willie). Peter grew up on Warralong Station, becoming an expert stockman and general station hand with a broad range of skills. While living at Warralong he was accidently shot in the knee by a white jackeroo and was always afterwards known as ‘Kangkushot’ from kangku, the Nyamal word for ‘knee’. Still a young man in 1946, he was an up-and-coming leader at the Twelve Mile during the strike. In 1947 he was identified in police reports as a member of the leadership committee there.

Following the strike, Coppin became leader of the main wolfram-mining camp at Cooke’s Creek, and in 1952 he was in charge of the cooperative’s mining operations at the Pilbarra mining area, before taking over the management of NODOM’s pastoral operations at Yandeyarra Station. Together with an active women’s committee which included his wife, Biddy, he was in charge of the community at Yandeyarra throughout 1953 and was a member of the cooperative’s ‘Top Committee’ along with Ernie Mitchell, Don McLeod and Des Stuart. Coppin remained with the group during the starvation time and was one of the leaders of the Pilbara Native Society established in 1955 by the Department of Native Welfare. He later became a director of Pindan, and in 1956 he returned to Yandeyarra with a group of Pindan people to establish vegetable gardens and muster cattle to support the group. In 1957, together with Mitchell and McLeod, he spoke at a public meeting in the Perth Town Hall about the strike and the achievements of the cooperatives. He remained second-in-charge of Pindan when the community split in 1959, and in 1970, following the sudden death of Ernie Mitchell, he became leader of the Mugarinya Corporation, as Pindan was now called.

Peter Coppin recorded the story of his life in Kangkushot: The Life of Nyamal Lawman Peter Coppin (written with Jolly Read) and passed away in 2006.