First isn’t it just too wonderful the splendid news we have just learnt at [having?] the Jap’s in their right place. The members of the Pastoral Industry have asked me to write to the P.A. [Pastoralists’ Association] and you regards (your friend) D. McLeod. At our Races on 21st July there were some 130 natives all camped at the 4 mile well and McLeod has meetings with them on several matters but the one we are more concerned with it [sic] that he is trying to organise a strike for higher wages as he has told them that they are Equal to the whites on stations and should be getting the same rate of pay.

He has told them to sit quiet until about May just before the shearing mustering starts and then demand higher wages, and has explained to them that the request will have to be granted otherwise we won’t be able to shear on a/c no musterers.

I have written to the P.A. and suggested they call you in and get you to member and the Com[missioneer] of Native Affairs and go into this matter and see if things can be put right as you know the industry is in a bad way and is trying to save every shilling to save capitulation. You have been in the district to know what natives are although some of them are worth paying but the majority cannot think[?] further than the one job and then if they are using any implements one has to go to that job and see that those tools are put back as mostly that are left on the ground when the job is finished. It is said that the natives are cheap labour yes in as far as money is concerned but they are not really as you have to employ so many to one man job. The general talk amongst the smaller station that if higher wages are to be paid the industry cannot do it and we will have to follow on with getting out of the country. Then the natives will be a liability on the government which at present has to shoulder too many bad debts now without having any further ones put on them and I think this matter can be squashed.

And I think the natives at the stations are all satisfied with the treatment they are getting and the only reason they want more money is to have a bigger gambling school as they very rarely buy anything with their money the only time they do buy a shirt or boots or trousers are when the ones they are wearing fall off them and usually they are bought on … until next pay day.

So we sincerely hope you will take this matter in hand immediately. 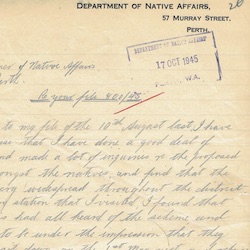 The Aboriginal organisers travelled around the area spreading the word about the strike. The Department of Native Affairs was troubled by this and tried to counter it. Nyamal man, Clancy McKenna, was one of the principal organisers. Dooley Binbin, a Nyangumarta man, took up an organising role late in 1945. 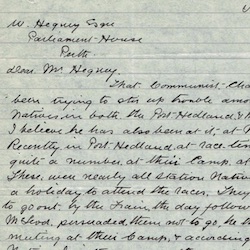 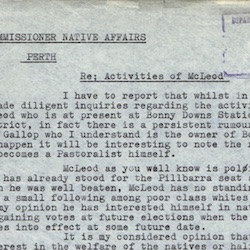 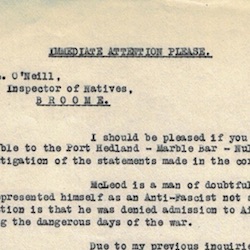 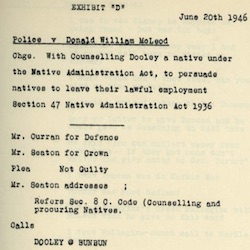