Pindan challenges Western Australia’s ‘leper line’ legislation by travelling back and forth across the twentieth parallel and bringing new members into the cooperative from northern stations. 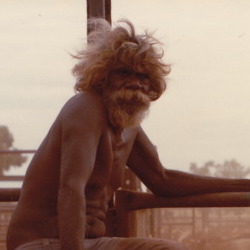 “Well look, shouldn’t have come through, people, you know, not right to be come”.

“Well”, I say, “This my country, can’t help it I come through, this is in my country. I been reared up in this country. Side of the beach all along right up to Broome, we bin going along, there bin old people been take us down, that much”.

After that, we come back, right back, right up to Port Hedland. After that we’re coming again, we come through, and all the constable, sergeant and all that, tell me, “You can put your truck about 5 chains, and you can walk into the station, talking to the white man”. But I went, me and Dooley, we went down there we gather them up all the people now, after the strike, you know, we gather them up. We been in the strike, everybody, all been on one side and we going see ’m north people now, we’re going to pick them up and take them down there, that’s why we, me and Dooley went down there. Right up to Emily soak, lot of people been there, old people. All right we go see ’m, and we stop there. I pick them up, from Mandora, Tom de Pledge say, “Oh yeah, that’s all right, you’re alright, you fellas doing all right, you fellas fight for right”, he tell me, from Mandora boss. “Take all these”.

Well I take all the people right up to Banningarra light house, that far, and I pull up there long Wallal, I trying to get a couple of people from Wallal.

“I don’t know where that two fellas gone. He bin here”. And he bin chase them about, chase them with a motor car, fire a shot, every way. And I went them two fella, we come through there, right I pull up there, and after that and I say, “Right I’ll see you, when I find those two boys, and I’ll be back”.

What happen, I want to see ’m, you know, get shot or what? run over or anything like that. Well I just went down to Pardoo boundary, Pardoo-Wallal, I had a breakfast there, I picked them two boys, and Dooley said to me, “Oh never mind”.

“Dooley, you want to come back with me and see that King Reg? We’ll do a fight against of him”.

We went alright, we went down to Port Hedland, and I sent word for solicitor, Mr Hughes, Crown Lawyer from Perth, and he coming, and we had a court there. Oh, that King Reg was shivering and everything, he went like this, you know. When the constable bin get the name, “You know who that man? He’s the crown lawyer from Perth, Mr Hughes”. A-a-after that he shaking, ah he knock the table, knock the chair, everything. And he walk out, he’s tell, “walk out and settle down”. After he come back again he shivering again, can’t, he can’t get through in that, nothing. And he pull that man, King Reg, Mr. Hughes, “Come on, you stand up here, I want to bump you with a car, same as what you bin done with those two boys”. After that one “Oh I can’t”, shivering and shivering. Fined him for two hundred, two hundred pounds for that, and let him go. And Tom de Pledge nothing wrong, he come clear, you know, that far it goes.