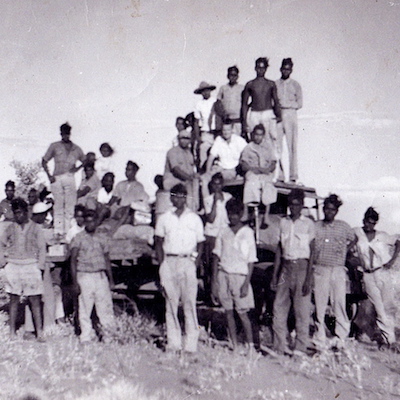 Northern Development and Mining, or NODOM, was the company name under which the marrngu cooperative operated during its years of prosperity in the early 1950s. It was established in December 1951 with Don McLeod as managing director. Shares were held by McLeod in trust for the Aboriginal members of the cooperative. Non-Aboriginal Perth residents Harry Marples Leighton and Herbert Christopher Griffin were the company’s other directors. A failed partnership with a South Australian company, Western Wolfram, to jointly work the cooperative’s wolfram deposits led to significant losses to NODOM through litigation. In mid 1953 State Mining Engineer E. E. Brisbane and Rodney Vernon O’Shannessy were appointed to NODOM’s board as a condition under which a state government loan was granted to the company. The company’s lawyer, E. O’Laughlin, was also a director. By the end of 1953 NODOM was facing financial difficulties. It went into voluntary liquidation in mid 1954 and its assets, including Yandeyarra Station, were sold to pay creditors.