When NODOM went into liquidation, the group was unable to market its minerals or buy food. Many marrngu left the group. Some remained, however, surviving through what became known as the starvation time. This is remembered by Munda Woodman, who was a child at the time. Munda Woodman and Ron (Rinti) Hale were children attending school at Yandeyarra in 1953. Children were cared for by Massey Chillawarra and his wife Lily, who took children to a remote pool to live off the land. 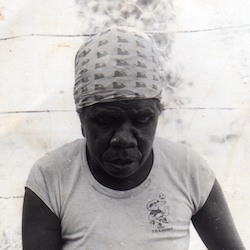 Munda: Starting school then, Massey and his old wife, they were the boss for us, and all the boys [Munda is unable to say the name of her classificatory son-in-law, and asks her husband Ron Hale (Rindy) to say the name].

Munda: Mm. He’s the boss for the boys, big boys. Then we starting bit of school, you know, we starting.

Munda: Kathy Brown. Max Brown and Kathy. That’s one of his wife.

Ron: Then we went, we bin biggest starvation then.

Munda: Yeah, we bin starvation for tucker that time.

Ron: We split up, finish school

Munda: Then we split up. Massey took us down to the Elephant Camp. Elephant camp, from Yandeyarra. That river called Elephant Camp. We were staying out there then. We had no flour, no sugar, no tea, we used to hunt for honey. Old people would hunt for honey, put it in the water, mix it with the water, make it sweet. Live on kangaroo, just water. Then after later one of them Welfare blokes was helping us with food then. We bin just starving for I don’t know how long, three or four months, I think. That welfare bloke was helping us then, bringing the food for us, you know, flour and sugar. Harvey Tilbrook or one of them Welfare blokes. Help us for food, you know. Bring a little bit of food for the old — for the old people and kids. 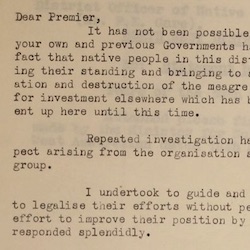 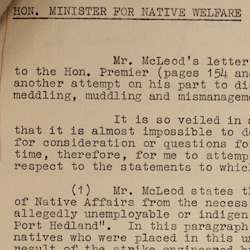 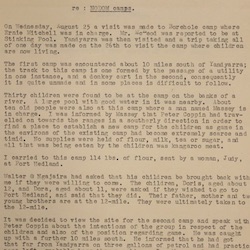 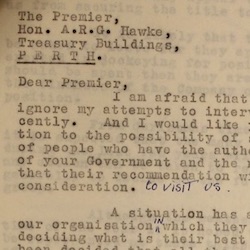 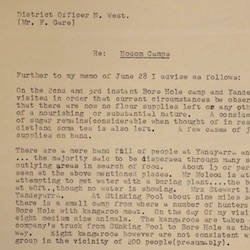