In the wake of this failed action, strike leaders began arranging for representatives from each station to come together for a meeting on 25 May. But, before this meeting could take place, McKenna, Dooley and McLeod were arrested. This letter was written by McLeod from the Port Hedland lock-up.

I have been asked to let you know that that a meeting of delegates representing the majority of station native workers is to be held at the 12 Mile Pt Hedland on May 25.

I was to invite you to have a representative of the gov[ernment] at this meeting so that a statement on Gov[ernment] Policy in regards to native affairs could be considered. I too was expected to attend.

Other items for discussion were

1. Progress made in having Gov[ernment] acknowledge the rights of native workers to organize and appoint their own representative

2. Discuss minimum cash wage of 30/- per week for all native workers

3. Interpretation of Regulation 81 A to C and assurance that regulation would be enforced

4. Right of entry of native reps to all work places to see that the regulations were being complied with
It is unlikely that this meeting will now take place as Clancy and Dooley two organisers have been apprehended and sentenced to 3 months gaol.

Apparently a good deal of pressure has been brought to bear on the natives generally to dissuade them from taking any further action on this matter.

I am myself held in custody awaiting trial on these offences under section 47 and so on.

Your native affairs officials should be in a better position than I am to say if this meeting will take place.

I wish to register a vigorous protest against the action of the police in arresting Clancy, Dooley and myself in connection with this matter, as such action is not in accord with the principles which have been the basis of progress in Aust[ralia]. And on behalf of the native workers demand that a Royal Commission be appointed to enquire thoroughly into and report on [the] application and policing of acts and regulations of the Native Affairs Dept which represent under present conditions a distortion of the original intentions and a grave injustice to the people concerned. 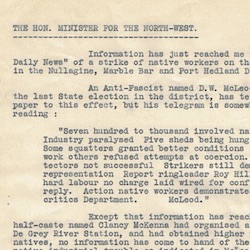 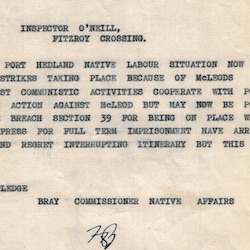 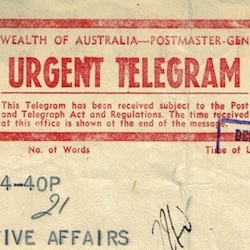 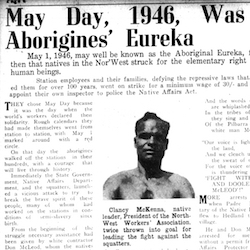