The scheme to obtain land was also explained by McLeod in a letter to Professor of Anthropology at Sydney University, A.P. Elkin.

Mrs Mary Durack Miller of Perth has invited me to write to you and put forward my views regarding WA natives to assist you to formulate a commonwealth wide policy for their care and progress.

I am only too happy to do so and I believe that my views on this matter should be useful but such a complex matter really requires several volumes to do justice to it.

Let me suggest that if you have not done so you secure the book written by Paul Hasluck as a thesis for a BA degree and published by the Melbourne University Press. This should give you a wealth of information and enable you to secure the source from which considerable research could be carried out to bring this matter up to date.

Jolly and Rose have had printed The Place of the Australian Aboriginal in the Evolution of Society which is definitely the most useful work as yet published regarding the social arrangements of WA natives. I can recommend this to you also.

Now although a very successful propaganda campaign has been carried out for many years in this State to prove that our native is subhuman and naturally an unintelligent incompetent, facts do not confirm this hypothesis. Given encouragement and opportunity the WA native with education could carry out his duty as an equal citizen on equal terms with his white contemporary. In fact some half castes, particularly in the Pt Hedland district, despite the fact that every obstacle has been put in their way, have by sheer merit and practically without education attained the right of equality although this has been savagely withheld from them and indeed at the present moment even illegal methods one being adopted by the Native Affairs Dept in an attempt to withdraw from them certain privileges which were temporarily granted them under threat of invasion and one now apparently regretted.

Although not officially recognised, I am in fact representative for and adviser to the fifteen hundred odd natives and half castes in this area. Actually, the Dept is antagonistic to me and in an attempt to debar me from having anything to do with natives have repeatedly on one excuse and another refused me a permit to work natives. The latest excuse being that I am not a ‘proper person’ to work natives.

As to the best plan for future advancement for these people, let me put their own view. This matter is confidential for the Natives Affairs Dept in this state has assumed the right to dictate terms and conditions on which these people are allowed to exist and is capable of confiscating any funds and the liberty of any individual amongst them.

Now these people contend that they have been robbed of their land without compensation despite the fact that WA agreed with the Imperial Government to set aside not less than one percent of the gross revenue for their use. It being pointed out that no charge rested so rightly on the state as this for if it was not for the fact that the natives had been deprived of their land there would be no state to tax. Now that the no vote [illegible] being and the hope that the Commonwealth Government may take over their affairs is remote, these natives intend to build up a fund to challenge the legality of the legislation under which they were deprived of the above mentioned [illegible].

I do not intend to say how or where this fund will be built up or held but their plea is since the state of WA became trustees to their estate, no law enacted by the WA Government is legal which deprives the beneficiaries in trusteeship to them the state of benefit: to the financial gain to the trustees or the WA Government. The wording of this is confused but you will understand what is intended. Can a trustee take for his own use moneys due to the beneficiary, and deprive the beneficiary the right of coming of age and to sell him into bondage (today the native is merely a chattel to the pastoral industry) without redress. Today the State revenue must be around £30,000,000 of which one percent is £300,000. The Natives Affairs Dept receives from the government less than £30,000, a large amount of which is spent in administration in which no native is engaged.

The natives in this district are organising themselves and discussing the best methods of struggle to achieve their rights their ultimate aim is to secure a block of ground (they have some 5,000,000 acres in view) on which and a few smaller blocks they can maintain themselves entirely by agriculture (irrigation) and grazing. They hope to be able to have their people educated in their own language and in English have their own people trained as doctors, teachers and scientists, and to control their own affairs without interference from outside and gradually to absorb the bush man (their block abuts on to wild country) and together raise their living standards until they can reach equality with all comers. They realise that this task is a big one, especially as it seems that not only will they have to depend on their own efforts but that all sorts of difficulties will be put in their way by vested interests through the government. However, they maintain that it is better to go down in struggle than to be exterminated by disease, neglect and exploitation. Of course, they do not speak in this language. They merely say they have been held too low too long.

If you are interested I will give you further information later.

But could you secure a legal opinion regarding the possibility of the suit against the WA government which I have mentioned. I would be pleased to pass such opinion on to them. 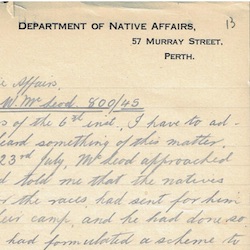 Ideas discussed included a scheme to obtain land of their own and set up economic enterprises so they would no longer be dependent on station employment. In 1945 marrngu from across the region held meetings to discuss these ideas when they converged on Port Hedland for the annual horse races. Constable Les Fletcher of the Port Hedland police was invited to attend. This is his report of the meeting. 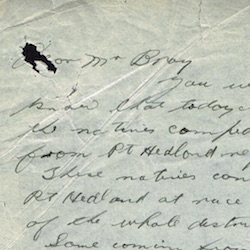 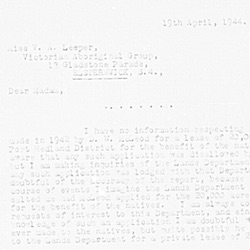