There has been an interesting reaction you will be interested in.

I think I told you we had been able to persuade the Anti Slavery Society of London to send out one of their executive to make an investigation. Lady Jessie Street has been in the East some time and over here; I wasn’t to be quite frank too happy with her as she appeared to have been too impressed by our detractors; however, she went up to Pt Hedland with two of our Directors Ernie Mitchell and Peter Coffin who had come down to speak at a public meeting in the Perth Town Hall on May 28.

Yesterday evening she returned and sought an interview with me today. Briefly she was so impressed with our team that she broke her journey to Darwin where Hasluck was arranging a tour of the Territory for her, and has come back for a day or two to try and make some impression on the Minister Brady and others.

She says she is delighted with our Gang [—] that although she has been interested in the Native Question for thirty years in Australia nowhere else has she met such a group of such outstanding merit. She also advised that the local Dr Dr Willington arranged for a small gathering of business people to meet her at his home and that he invited Ernie and Peter to be present also and that all of them met in conference on equal terms.

This is something unique in Australian history as normally Aboriginals are condescended to if received at all.

I would like to refer to the letter from Hawk[e] which I let in your file for you will see in it that although he brushes me off he refers to the possible decision to introduce legislation conferring Citizen status on West Aust Aborigines at birth; how dinkum this is likely to be can be gauged by the kite flying as illustrated by the enclosed cutting.

History has shown that West Australia cannot be trusted to deal fairly with this trust and if Aboriginals ever secure equal rights in Australia it will be when the Commonwealth uses its perogertive [sic] and overrules the States. 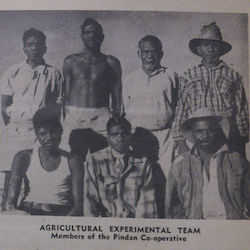 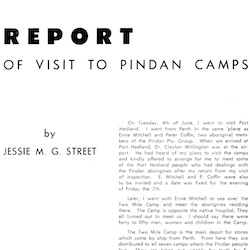 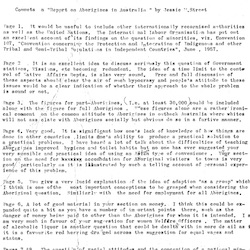 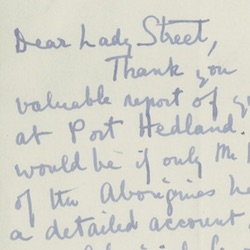 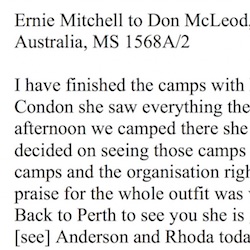