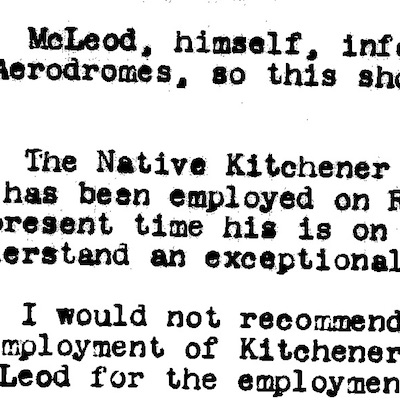 A Nyiyaparli-speaker born around the turn of the century, Kitchener was a key early organizer of the strike. Having worked on Ethel Creek Station since childhood, he was known as an exceptionally good station hand, with outstanding skills as a stockman, blacksmith, saddle-maker, and mechanic. He shifted to Roy Hill Station in 1941 and it was probably the following year that he met and befriended Don McLeod, who had a well-sinking contract on Roy Hill. Despite Kitchener’s abilities, which impressed McLeod, he was unpaid. In late 1943, when McLeod began a fencing and well-sinking contract on Bonney Downs Station, Kitchener joined him there, engaging in the early discussions that would lead to the strike. Throughout 1944 and 1945, Kitchener was active in spreading word, particularly throughout the Nullagine region, about the strike and the scheme to acquire land. Although he withdrew from the movement when the strike began, he played an important role in its instigation and in raising McLeod’s awareness of the conditions under which Aboriginal people were living.