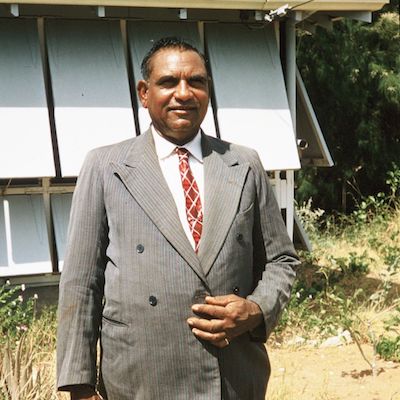 Ernie (or Ernest) Mitchell was born at about the turn of the century, the son of a Nyamal woman and a white man, Ernest Augustus Mitchell, part-owner of Strelley Station. Growing up on Pilbara stations, Ernie never had the opportunity to attend school, instead becoming a skilled horsebreaker, stockworker and drover. For a few years prior to the strike he worked on Tabba Tabba Station, where he and other workers went on strike on 1 May 1946. Unwilling to leave the station without labour for the shearing, he and other Tabba Tabba workers saw out the shearing before shifting to the Twelve Mile Camp. Mitchell played a prominent role in the race time demonstrations of July and August 1946, and was one of several leaders at the Twelve Mile, which was located in an area over which he had customary title. He was frequently identified by the Department of Native Affairs as a ‘ring-leader’ in the strike. In 1947 he received seven days imprisonment for using ‘threatening words’ when, in response to intimidatory behaviour by a police officer, he threatened to escalate the strike. In 1948, when many Twelve Mile strikers returned to station employment, Mitchell shifted to Moolyella to support Dooley Binbin’s leadership of the large strike community there.

During the years of the NODOM mining cooperative in the early 1950s Mitchell oversaw the general organisation of the large and widespread mining community. He worked to achieve greater gender equality within the cooperative, encouraging women’s participation in decision making and instituting women’s committees to give women greater authority in the scattered mining camps. His quietly efficient behind-the-scenes leadership style struck observers. Native Affairs officer Frank Gare remembered being impressed by Mitchell’s ‘dignified courtesy’ when he first met him in 1951. Although softly-spoken, he was a tough negotiator and a powerful speaker at meetings.

Mitchell continued to lead the group during the ‘starvation time’ that followed the liquidation of NODOM in 1954. His authority was recognised by Western Australia’s Department of Native Welfare when the Pilbara Native Society was set up under his leadership. In the second half of the 1950s, operating under the company name ‘Pindan’, the group was often referred to as ‘the Mitchell group’ or ‘the McLeod/Mitchell group’. He was at the forefront of the group’s political and civil disobedience action but was also frequently the point of contact between the group and the outside world, representing Pindan in its dealings with government officials, businessmen, mining companies and the like. By 1960, following McLeod’s resignation from Pindan, Mitchell was managing director of a uniquely independent Aboriginal company, one of the directors of a syndicate company formed with the Sims Metal group, and the liaison person between Sims Metal and Pindan, despite never learning to read and write. He continued to lead Pindan for another decade until his sudden death in 1970.