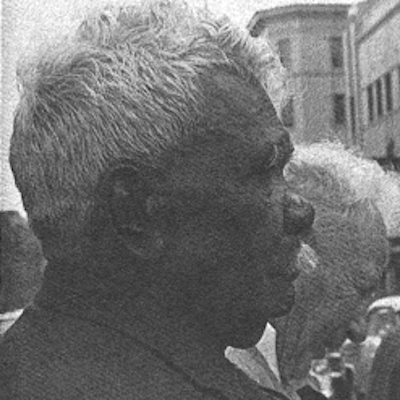 Dooley Binbin, a Nyangumarta man also known as Winyirin or Yurlpuly, was born in the Great Sandy Desert in about 1900. His early years were spent in the desert before he made the journey in to station country. He cleared spinifex from the recently-constructed rabbit-proof fence at the age of eight or nine, before working on Pilbara stations, including Warrawagine. He was not involved in early discussions about the strike, being first introduced to Don McLeod by Clancy McKenna at a meeting in Nullagine in late 1945, following the Port Hedland race-time meetings and following many months of discussion about striking. Dooley started working with McLeod and Kitchener fencing and well-sinking on Bonney Downs Station. In March 1946, when McLeod went to Perth to enlist support for the strike, Dooley and McKenna carried out final organising work, visiting stations to encourage people to stop work on 1 May. To ensure that everyone knew the right day to strike, Dooley drew up and distributed rough calendars as needed.

Following the 1 May strike, Dooley was arrested at Moolyella and sentenced to three months imprisonment for enticing Aboriginal people from lawful employment in breach of section 47 of the Native Administration Act 1936. However, public outcry led to his early release, enabling him to take a leading role at the Port Hedland races in July 1946 in encouraging marrngu to take a stand against oppression.

Having authority within Aboriginal Law and the strength to stand firmly against settler opposition, Dooley was the leader at Moolyella throughout the strike. In 1949 he responded to threats made by Native Affairs Officer Laurie O’Neill by mounting a campaign to fill the jails with strikers, a civil disobedience action that successfully pressured the Department of Native Affairs to find less punitive ways to deal with the movement.

A passionate activist, Dooley lacked the organisational skills of men like Ernie Mitchell and lost his leadership position in the early 1950s, as marrngu shifted their attention from striking to mining. According to Dorothy Hewett, McLeod considered Dooley too militant to be a good leader. To the anthropologists John and Katrin Wilson, who met Dooley in 1959, he seemed to be ‘always running strikes’. While not given formal leadership positions in the organization, he was recognized and respected for his role in the strike, and he contributed to the movement as something of a senior statesman. In 1957 his militancy was called into play in Pindan’s campaign to challenge state legislation which made it illegal for marrngu to travel from north to south of the twentieth parallel as a precaution against the spread of leprosy. Under Dooley’s leadership, parties of Pindan men crossed the ‘leper line’ to bring workers on stations north of the twentieth parallel across the line to join the cooperative. For this he was charged with breaching section 10 of the Native Administration Act 1936, and fined.

In 1960 Dooley joined the Nomads faction that split away from Pindan, and in 1963 he addressed the conference of the Federal Council for the Advancement of Aborigines in Canberra. He passed away in Port Hedland in 1982.