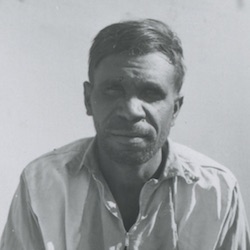 He give us promise, old Dooley, old Clancy McKenna, and nother bloke again, nother bloke he went around Ethel Creek, Roy Hill, all around there, every place, and Jigalong. Went round. And Dooley and the other one, Clancy, get round up here, this place, Yandeyarra, Indee, Tabba, right back Munda, come back right back Boodarie, all around every station. Went round, what time we gotta be strike. We made it one arrangement, all got to be in the strike. Alright, so we was working working in, when the times coming we went. I went to Sheep Camp then, all the mob, from Yarrie and Muccan, all in the one. And, what time, Monday, everyone, Monday, all got to be strike. So we, everyone, all the musterers too, get them horses in the morning, saddle up, everyone, we went Sheep Camp, all the musterers all stop. Squatter bloke bin there, Jim Lewis, he there, ‘what happened?’

‘We striking off, finish. We’re not working, all the Warrawagine mob. And Sheep Camp mob same again’. He was mustering the cattle then, he had a mob of cattle in the yard, Warrawagine Station. And this mob he had a mob of sheep in the yard. ‘No, we’re not going back. We’re finished’. And they stopped one day, left the horses in the paddock. Alright, next day, the policeman’s coming, Mr Marshall. Went first thing to Warrawagine. He had a big row there: ‘No, we’re not going. We’re not working’.

‘You gotta work back. Sheep Camp mob is all working. Everyone working’.

And so we come back, come back that morning work, work back. And that same morning we see that Mr Marshall he come to Sheep Camp.

I was [listen then?], Sheep Camp, and from there I belong to Yarrie. But we all, all gotta be in one, all gotta finish. Not working.

So we had a big argument, and went back to work. Next day, after shearing finish, all one, two, all build up Moolyella mine. Same as Yarrie, walking, nother people working to the Twelve Mile, nother mob going to Moolyella. Every people, all coming, every place. Munda coming, Boodarie coming, and Indee mob, Tabba, Strelley, all the mob coming in and all build up in two place. 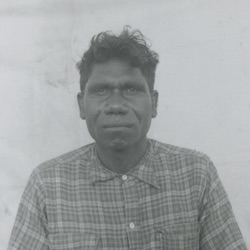 Small communities of marrngu on widely dispersed stations found it difficult to conduct a strike of this nature. Kujupurra (Cranky) was a cattleman on Warrawagine station on 1 May 1946. He recalls the tactics used by the police to suppress the initial strike action. 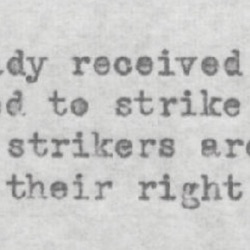 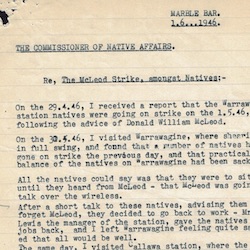 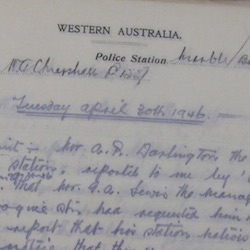 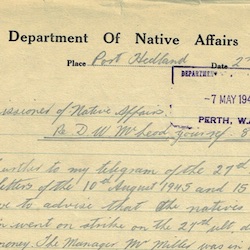