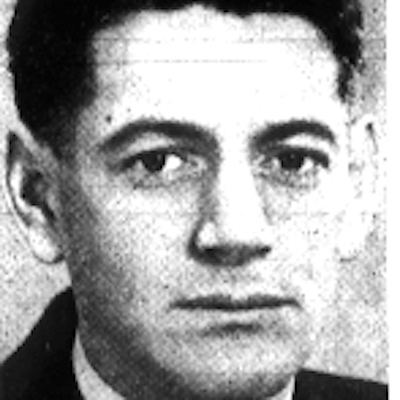 In the 1930s and 1940s the Communist Party of Australia (CPA) advocated a policy for Aboriginal people that differed markedly from approaches being taken by the state and federal governments at the time. Its Aboriginal platform was much more in line with Don McLeod’s vision for Australia’s north-west, outlined as early as 1944 and maintained over the following decades, of Aboriginal people in control of their own affairs, pursuing economic enterprises on communally-owned land and with their own hospitals and schools teaching in their own languages. In 1944 and 1945, while schemes and possibilities were being discussed by marrngu in the Pilbara, McLeod was a member of the CPA and corresponding with Western Australian Communists. His correspondents included the writer Katharine Susannah Prichard and Graham Alcorn (pictured here), editor of the communist newspaper the Workers’ Star and the Western Australian CPA branch member with responsibility for campaigns relating to Aboriginal matters. It is probable that the development of McLeod’s ideas was strongly influenced by the CPA. In April 1945, while Clancy McKenna and Dooley Binbin made final arrangements in the Pilbara for the 1 May strike, McLeod spoke of the planned action at the annual state conference of the CPA in Perth and attended a class on Marxist theory. He called on Perth Communists to take up the cause and send revolutionary cadres to the Pilbara. Although he would later dismiss his association with the CPA as merely a pragmatic strategy to generate support for the strike, his knowledge of Marxist theory, which astonished Perth-based Communists, and his willingness to identify as a Communist even when such disclosure did not assist his cause, suggests that his involvement was a matter of principle as well as tactics.

As a result of McLeod’s CPA involvement, there was a body of interested people in Perth who were informed about the plan for a strike and ready to take supportive action when it began. CPA campaigning throughout May 1946 generated public interest in the strike and protest over the imprisonment of its leaders, leading to the formation of the Committee for Defence of Native Rights (CDNR). It was this organisation rather than the CPA that provided the essential legal and campaign support for the strike. Although Communists were involved in the CDNR, the CPA as an organisation had no direct involvement in the Pilbara movement once the strike got underway. Disappointed in the Party’s failure to provide the kind of support he demanded, McLeod resigned his membership in 1947 and in later years made disparaging remarks about it. Nevertheless, the CPA did play an important role in the formation of McLeod’s ideas in the lead-up to the strike and in providing encouragement when plans for the strike were under way. Its role in igniting a rapid public response in Perth when the strike began, and the ongoing coverage provided by its newspaper, the Workers’ Star, were also important in preventing a harsh suppression of the strike by government authorities.