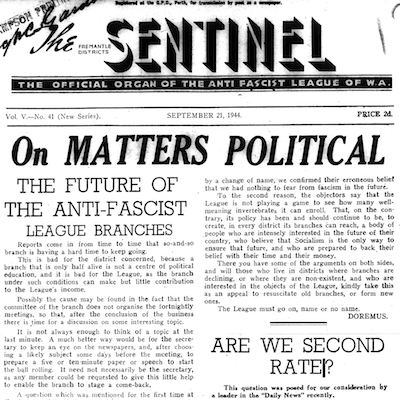 The Anti-Fascist League was a Western Australian organisation founded by Edward (Bill) Beeby in 1940. League activities were conducted through weekly radio broadcasts on human rights and civil liberties issues presented by Beeby and other socialists. These broadcasts served as a focus for discussion in branches established throughout Western Australia during the war years. A League member who remembered the organised listeners’ groups that gathered around wirelesses each Sunday evening to hear Bill Beeby speak, ‘marvelled at his knowledge and words of wisdom’. Don McLeod was a member of the League in 1943 when he worked at the Comet gold mine near Marble Bar, becoming Marble Bar branch secretary as well as participating in the Comet mine discussion group. Aboriginal issues were included in these broadcasts and discussions, with talks given by anthropologist Fred Rose, for example. McLeod’s interest in the cause of Aboriginal rights may well have been stimulated by these discussions. He wrote in 1943 that the Marble Bar branch had resolved ‘by every means’ to ‘endeavour to assist the coloured people in their attempt to gain equality both social and economic and political’. In 1943 and 1944 he wrote articles on Aboriginal issues for the League’s newspaper, the Fremantle District Sentinel. He fostered interest in the League among Aboriginal people in Port Hedland, and in 1943 Port Hedland’s Euralian Association became an affiliated organization. It was probably his involvement in the Anti-Fascist League that brought McLeod into contact with Perth-based Communists such as Katharine Susannah Prichard, and led to him joining the Australian Communist Party.